A large reputable member threshold multisig operating as functionaries for a Bitcoin-pegged deterministic replicated state machine sidechain with as-compatible-as-possible-with-mainchain semantics is probably more reliable and secure that most alternative chains.

There are a lot of things that I wish would happen, but don't have the time to actually do myself. I complain about such things all the time to basically anyone who will listen. Such efforts are all well and good, and sometimes actually pay off, but additionally, I'd like to materially support people who might actually do these things.

This post, which I'll try to keep up-to-date, if I remember, documents the projects which I wish some talented go-getter would take on, and in which I would invest money in if given the opportunity.

If you are one of these aforementioned go-getters, email me!

This mail is inspired by Chia's coin IDs. Chia coin IDs consist of:

One consequence of this is that outputs in Chia have a dedicated textual ID. This seems beneficial, separate from any larger technical consequences, and made me wonder if we couldn't replicate that in Bitcoin.

I find this representation unsatisfying:

I propose a dedicated representation of outputs using Bech32m. Bech32m is especially legible, due to its human-readable part, and is compact, and easy to type and verify. Although having error correction doesn't seem absolutely necessary, it doesn't seem like a downside. The representation uses "coin" as the human-readable part, with the payload being the transaction ID, followed by the 4 byte index.

Anacdotally, I find that many non-expert users I talk to think and talk about Bitcoin as if it were an account-based system, and tend to think in terms of transactions. I wonder if having coin IDs, in the form I propose or in some other form, would help remedy this, similar to how transaction ids, block hashes, and addresses help reify those concepts. The particulars of the representation are of secondary importance.

Federated blind mints have attractive privacy, scaling, and security properties that are highly complementary to those of Bitcoin and the Lightning Network.

I originally became interested in blind mints while thinking about Lightning Network wallet usability issues. When Lightning works, it is fantastic, but keeping a node running and managing a wallet present a number of challenges, such as channel unavailability due to force closes, the unpredictability of the on-chain fee environment, the complexity of channel backup, and the involved and often subtle need to manage liquidity.

All of these problems are tractable for a skilled node operator, but may not be soluble in the context of self-hosted wallets operated by non-technical users, hereafter normies. If this is the case, then normies may have no choice but to use hosted Lightning wallets, compromising their privacy and exposing them to custodial risk.

Chaumian mints, also known as Chaumian banks, or blind mints, offer a compelling solution to these problems, particularly when operation is federated. Chaumian mints, through the use of blind signatures, have extremely appealing privacy properties. The mint operators do not know the number of users, their identities, account balances, or transaction histories. Additionally, mint transactions are cheap and can be performed at unlimited scale.

Mint implementations, typified by eCash, have hitherto been centralized, and thus, like all centralized, custodial services, expose users to custodial risk in the form of operator absquatulation and mismanagement. To fix this, mint operation can be federated, with all operations performed by a quorum of nodes controlled by different parties.

Despite these interesting properties, Chaumian mints have largely been forgotten. This post gives an excellent overview of the phenomenon. I believe that Chaumian mints are currently severely underrated in general, and in particular deserve consideration as a potential avenue for improving custodial Lightning Network wallets.

Privacy: Privacy leaks from a Lightning mint come in two forms, internal and external, when a mint operator or an outside actor, respectively, observes sensitive information.

Blind signatures protect against internal privacy leaks, making them a strict improvement in that respect over custodial Lightning wallets.

Security: The security of a Lightning mint is weaker than that of a self-hosted wallet. A quorum of federation members can abscond with funds. However, compared to a standard custodial Lightning Network wallet, security is greatly improved. Additionally, federation members might be located in different jurisdictions, making the mint robust to regulatory interference. Furthermore, members might be entities with online reputations, such as anonymous Bitcoin Twitter users with an established history of productive shitposting, providing further assurances against mismanagement and fraud.

Scaling: Mint operations are extremely lightweight, similar to Lightning Network transactions, so scaling properties are similar to the Lightning Network itself. Additionally, users need not manage their own channels, so a well-capitalized federation can open channels efficiently, lowering the per-transaction channel management overhead.

Interoperability and market dynamics: Additionally, my hope is that such systems will be developed with a standardized protocol for communication between wallet interfaces and mint backends. This would allow users to use different backends with the same local wallet interface, encouraging competition in the market.

For more discussion of Chaumian mints and their applicability to Bitcoin, see fedimint.org. Elsirion, the author, is also at work on MiniMint, a federated Chaumian mint with Bitcoin and eventually Lightning Network support.

To close with a bit of speculation, I believe that Chaumian mints were never of particular interest or importance because they were limited to interoperating with the fiat currencies of the time. With the ascendance of Bitcoin, mints now have access to a powerful, decentralized, and uncensorable currency , made economical and fast by the Lightning Network.

I believe this layering of Chaumian mints on top of Bitcoin and the Lightning Network will, in the fullness of time, be demonstrated to be enormously powerful, and make Chaumian mints themselves worthy of renewed study and consideration.

Bitcoin will greatly reduce the power of the state, which rests entirely on its capacity for violence. This capacity is maintained by paying and equipping people to commit violence on its behalf, and it acquires the resources to do so by printing money, collecting taxes, and issuing debt. 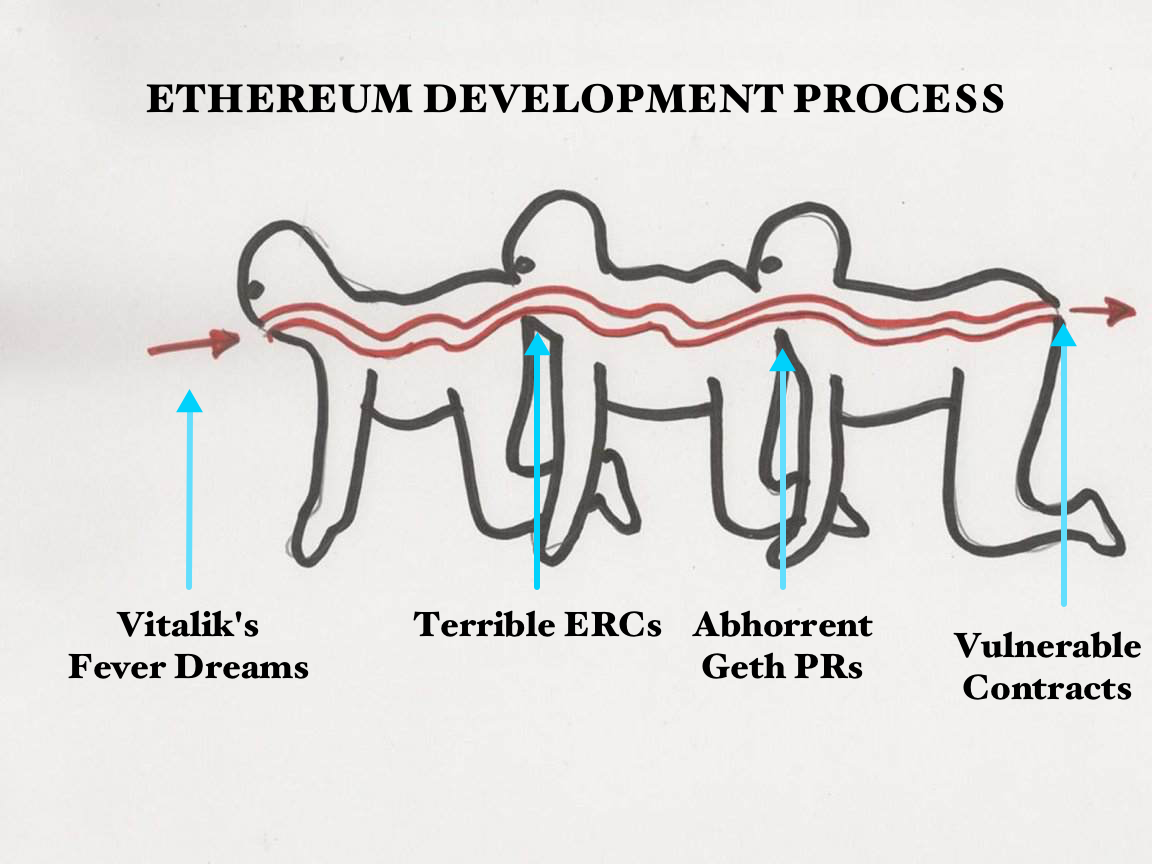 A Kademlia-inspired modification of Dandelion for use in Grin.

We all stood, gathered our things, walked down the cafe stairs and out to the dark and bustling Berlin street.

After a few goodbyes and handshakes, everyone headed off in different directions, for different destinations.

The meeting had felt momentous to me, a marker of strange and interesting times to come. I headed to the U-Bahn, alone.

The Lightning Network has the potential to greatly improve cryptocurrency exchanges.

Lighting Network payment channels could be established between users and exchanges to speed the transfer of funds.

This would be a huge boon, moving many on-chain deposit and withdrawal transactions off-chain, but is possibly only the beginning.

Since Lightning Network payments can span different blockchains, an exchange could use a cross-chain Lightning node to expose its internal order book to external entities.

IOTA is a cryptocurrency targeting the internet of things. It purports to be scalable, decentralized, and feeless. Unfortunately it is none of those things.

In this article I attempt to summarize the numerous technical, social, and ethical problems surrounding the IOTA project, The IOTA Foundation, and the IOTA developers.

Investing in cryptocurrencies is not the same as buying simple equity in a company.

Although each company has a different business model, they and the equity they issue are largely structurally homogeneous. They hold their monies in banks, pay for their expenses with wire transfers and cheques, follow prescribed rules of accounting, and issue stock that operates according to well understood rules. This is not to say that said practices are good or bad. They are simply a known factor.

Cryptocurrencies and tokens, however, are structurally heterogeneous. They have different codebases, modes of operation, levels of complexity, and security models. Although broadly lumped into the same category, they can, by the nature of these differences, have almost nothing in common.

Investing in one is like buying stock in a company with novel business models, banking practices, and accounting methods, and furthermore whose stock is issued under a bespoke scheme and follows unique trading rules.

Accordingly, a much, much greater level of care is required when making such investments. If any one of these novel mechanisms fail, your investment may go up in billowing smoke and flames overnight.

This is not to say that you should completely avoid cryptocurrencies and tokens, just, you know, do your homework.